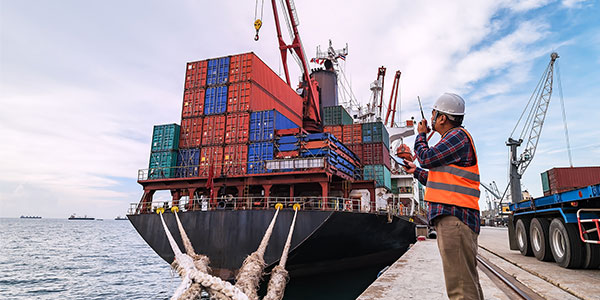 LNG (Liquefied Natural Gas), a fossil energy mainly composed of methane, is currently one of the energy transition solutions that provides a real alternative for ships using fuel oil.

This gas makes it possible, on average, to reduce CO2 emissions by 20%, nitrogen oxide emissions by 80% and to eliminate almost all sulphur and fine particle emissions.

The need to green LNG ships is becoming increasingly important as global and European regulatory restrictions and controls move towards reducing emissions.

LNG has therefore managed to earn its place among traditional energies: for example, CMA CGM via its affiliate Containerships received its first LNG-powered container ship as early as December 2018, marking the beginning of a transformation for the French shipping company. Indeed, it was the first deep-sea shipping company to publicly announce its commitment to LNG, according to Containerships’ CEO.

Nevertheless, although LNG is an interesting alternative to fuel oil and complies with the MARPOL Convention, it also has its limits.

At present, these LNG ships are still mainly used in the North Sea and operated by Norway.

In addition, the cost of building ships powered by this gas, which makes them considerably more expensive, may be a real break on their development. Thirdly, the supply of LNG remains an unresolved issue.

This could be Ship to Ship (one ship supplying another), Truck to Ship or Port to Ship.

Nevertheless, these solutions seem to be unsound since the LNG fleet is not very developed and consequently LNG bunkers are not very present either.

However, other perspectives are possible: unlike LNG, which remains a fossil fuel, bioNGV appears to be the most ecological alternative. BioNGV is obtained from the methanization of various and sometimes combined organic wastes such as household waste, sewage plant sludge, catering residues etc…

Current studies on this biogas seem to show that the analysis of the world’s sustainable biomass resource could exceed the total energy demand of the maritime sector. For the time being, this biogas is only used as a complement to LNG and remains in the test phase, but it may be the new fuel of tomorrow.