The quality of the loading and securing of goods contributes to the safety of road transport and also to the condition of the goods on delivery.

According to the available documentation, up to 25% of accidents involving large trucks can be attributed (as the main cause or aggravating factor) to improper load securement.

In countries where securing is monitored by law enforcement agencies, such as Germany, there are some disturbing figures.

For example, 70% of the goods loaded on a road vehicle are said to be completely unsecured or inadequately secured. In addition, 10% of goods transported by road are damaged due to inadequate securing.

The applicable directives, standards and laws

To address these issues, the European Directive 2014/47 established in 2014 introduces the main principles of stowage.

Therefore, this directive refers to a series of 11 standards of which the 4 main ones are listed below :

Nevertheless, the stowage control, detailed in Annex III of the directive, has not been transposed in French law. These requirements are not obligatory on our territory during inspections.

The last report of the European Commission (November 2020) pointed out this lack of harmonization with regard to cargo securing controls which are only applied by 20 member states and whose procedures are not mandatory.

A reinforcement of these provisions has consequently been recommended for the next revision of the directive.

The design of cargo securing devices is based on 4 main factors:

These factors are presented below.

The EN 12195-1 norm has defined the accelerations (extreme stresses) to which a load can be exposed. 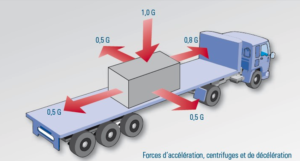 From these forces, the necessary lashing capacity can be determined to prevent the cargo from slipping and damaging the goods.

The coefficient of friction expressed as μ indicates the degree of slippage of a load. The higher the coefficient μ, the greater the resistance against sliding.

The main coefficients have been established by norm EN12195-1.

These coefficients are only applicable if the floor has been swept and is dry and free of all traces of grease. A wet floor will limit the coefficient of friction. 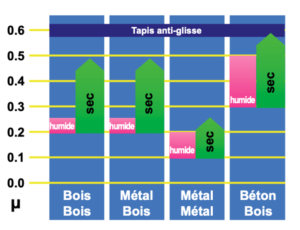 Therefore, it is easy to understand why the application of anti-slip mats is recommended. In fact, the use of anti-slide mats allows the elimination of lateral and rear accelerations (0.5G) and to get closer to the forward acceleration (0.8G) that can be experienced by the goods.

The bodywork of trailers plays an important role in the blocking of goods.

Vehicle walls have no normative resistance.

After applying the first 3 factors, it remains to determine the lashings to be applied to combat the load’s inertial force resulting from the accelerations.

There are two main lashing methods:

In the majority of cases, the lashing force is applied by the use of textile straps with turnbuckles on top of the cargo. This is called “covering” or ” friction” lashing.

With the help of a tension device, the strap is given a defined pretension force via the hook. These forces are defined in the EN-12195-2 standard and are indicated on the labels of the straps and turnbuckles. 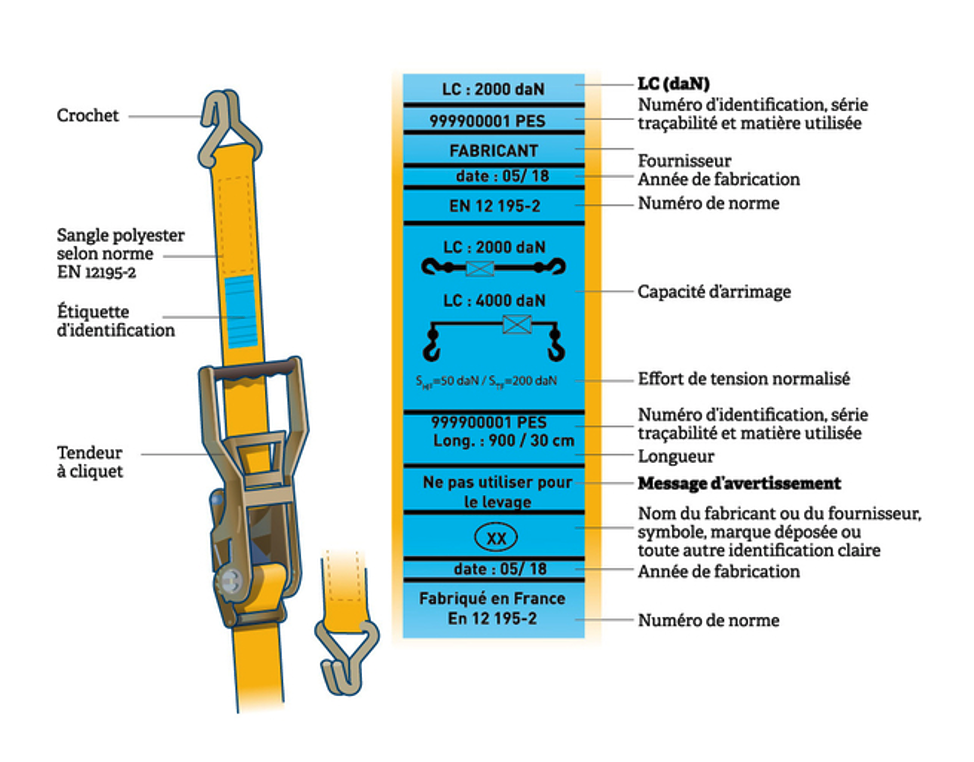 For this type of lashing, contrary to popular belief, the lashing capacity (CMU) is not to be taken into consideration but the STF (Standard Tension Force) corresponding to the standard tension force applied by the said strap. It should be noted that this value may not exceed the tension of the tensioner.

Presence or not of vacant space (concept of solid load) In order to secure a load perfectly, it will also be advisable to take into account the following points:

Thanks to all these tools and standards, proper stowage can be applied to goods for their transport by road. This stowage will limit accidents (often more serious when they involve heavy goods vehicles) and reduce damage to goods.