Accueil » News and Updates » Wedging of a pleasure boat : the interview of a specialist Vincent Harnois

Interview with Vincent Harnois, technical sales manager since 2009 at Nautipark, a company specializing in the manufacture of wedging and handling equipment for boats since 1994, equipping three quarters of French harbors and having an integrated design office dedicated to the analysis of feedback.

Over the last 10 years, I have observed a great advance in the field of wedging, particularly in marinas. This progress is part of a global approach to improving port activity, which is expressed in particular by more ecological careening and standardization of handling and wedging equipment.

Four improvements are being implemented:

– The professionalization of handlers;

– Ergonomics for wedgers and handlers;

– Efficiency, because a professional who is quicker to wedge can wedge more boats and improve profitability.

There are many more sailboats than motorboats that fall over.

This is a classic, the first reason for a sailboat to fall. Typically, the furling genoa creates a significant wind load that can cause the sailboat to fall and sometimes result in a chain fall of several units.

I often see stands used with skids positioned as wide as possible from the boat (as far out as possible), which is not a good solution. A stand should work in compression (as horizontal as possible), not in the spread. There is no risk of overloading if the weight of the boat rests on its keel.

On our stands, we have provided color indicators. Green means the skid is working at a flat angle. The more it angles, the more it goes to red, the less interest the stand has.

First and foremost, the most effective way to do this is to obtain the manufacturer’s rigging diagram, which for newer boats can be found in the owner’s manual. If this is not the case, I invite the boat owner to call their dealer to obtain it. If no rigging diagram is available, it is necessary to identify the structural reinforcements of the hull (bulkhead, transom, frame) by probing the hull with a mallet, a wrench or with your hand.

When the sails are set, the mast can vibrate and the boat “dances” on its bows. If the stands are on soft areas, the movement is amplified until the hull can be perforated. If they are on hard points, the movement is contained.

Some sites are starting to use stickers to indicate the stand points.

This is essential, whether it is a sailboat or a motorboat. If this is not the case, the boat is in suspension. However, because of the way they are made, the stands have a gap between the male and female stanchions. This suspension creates instability and the boat can move or even fall.

For a keelboat, the keel must be placed on two planks arranged perpendicular to the axis of the boat. For a motorboat or an integral centerboarder, it must be placed on supports (tins, trestles, or others) placed at the level of the reinforcements and distributed along the length of the keel line to avoid an excessive local load.

The maximum working load (MWL) of all supports must be able to support 110% of the boat’s weight. 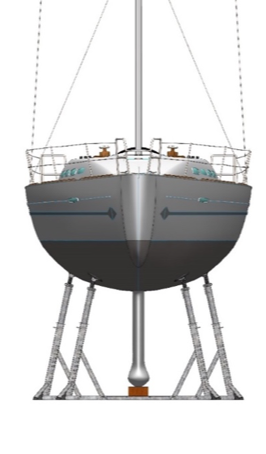 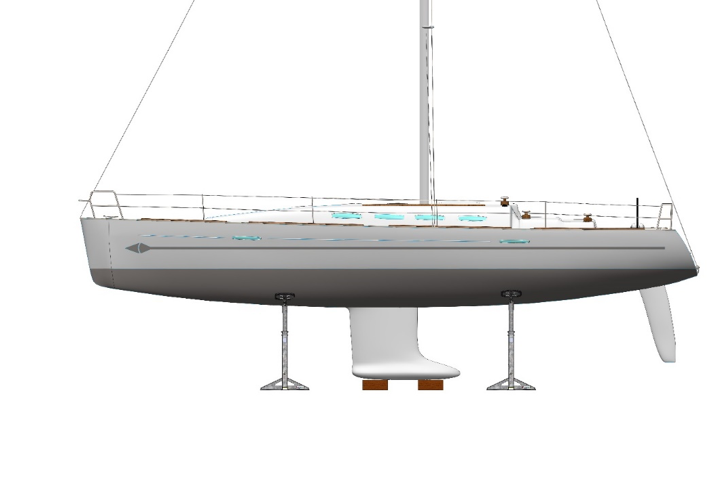 The side stabilizers are essential, you must use material in good condition, adapted to the shape and length of the hull. The maximum working load (MWL) of all stabilizers must be able to support 50% of the boat’s weight.

When the boat stays a few days in a technical area or on a careening area, we tend to leave the sails in place, it is then necessary to reinforce the wedging with other stands and/or to carry out a stowage / rigging on the ground on fixed points. In winter, the most important thing is to position the stands correctly and adjust the angle of the skids. 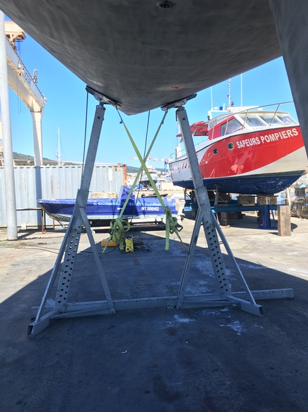 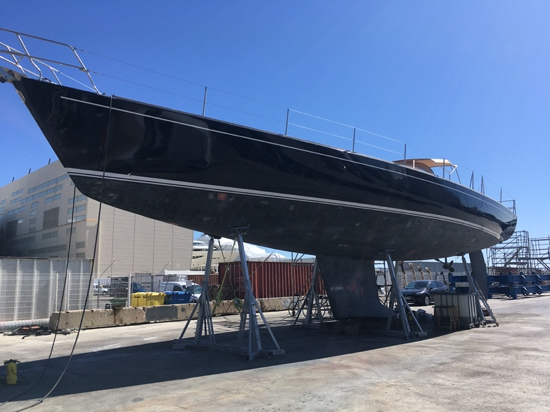 In the nautical industry, wedging is still the poor parent in comparison to sail crafts and engines in particular. By crossing France on a daily basis to meet marinas and boatyards, I hope to contribute to sharing and transmitting the experiences of each one, but today, there is still no real consultation on the subject.

It would be very interesting to build a working group gathering manufacturers cradles, handlers who would have a lot to say about the ergonomics of the cradles, insurers who would bring a safety and normative aspect. The role of the manufacturers would then be to propose efficient solutions and to harmonize the wedging standards.