Accueil » News and Updates » Stowage: Responsibility under the standard contract and the CMR

First of all, it is necessary to define precisely what stowage is and what actions are included under this term.

According to EN12195-1 “Cargo securing devices on roadvehicles” , stowage is a method of retaining the cargo on the transport unit by means of flexible devices.

This definition essentially excludes any rigging operation that the above-mentioned standard designates as a restraint device.

In law, as well as in jurisprudence, the notion of stowage takes a more generic form by overlapping these two actions, which are in fact distinct.

The question therefore arises as to who is responsible for securing the loads within the transport units.

We shall see below that this responsibility may fall to the carrier as well as to the principal, whether in the context of a national (1) or international (2) shipment.

In the context of a national shipment of goods, it is advisable to refer to Article 7 of the so-called general standard contract.

The latest article states that these operations “are the responsibility of the person carrying them out“.

For shipments with a mass of less than 3 tonnes (Art. 7.1), this point is not at all open to debate, as the carrier bears full responsibility for the stowage operations.

For other shipments (Art. 7.2), the standard contract states that loading, blocking and stowage operations are carried out by the shipper under his responsibility.

However, the standard contract does not relieve the carrier of all responsibility, stating that it must:

Thus, we see the development of shared responsibility for the implementation of stowage between the shipper and the carrier.

This joint responsibility is further reinforced by the grounds for exoneration of liability that can be invoked by the carrier in the event of damage during carriage, that is if the damage results from :

It should be noted, however, that article 7.2.3 moderates this observation by recalling that the carrier participating in loading, securing, stowing or unloading operations is deemed to be acting on behalf of the shipper or the consignee and under his responsibility.

The jurisprudence also applies the law in a strict and enlightened manner: 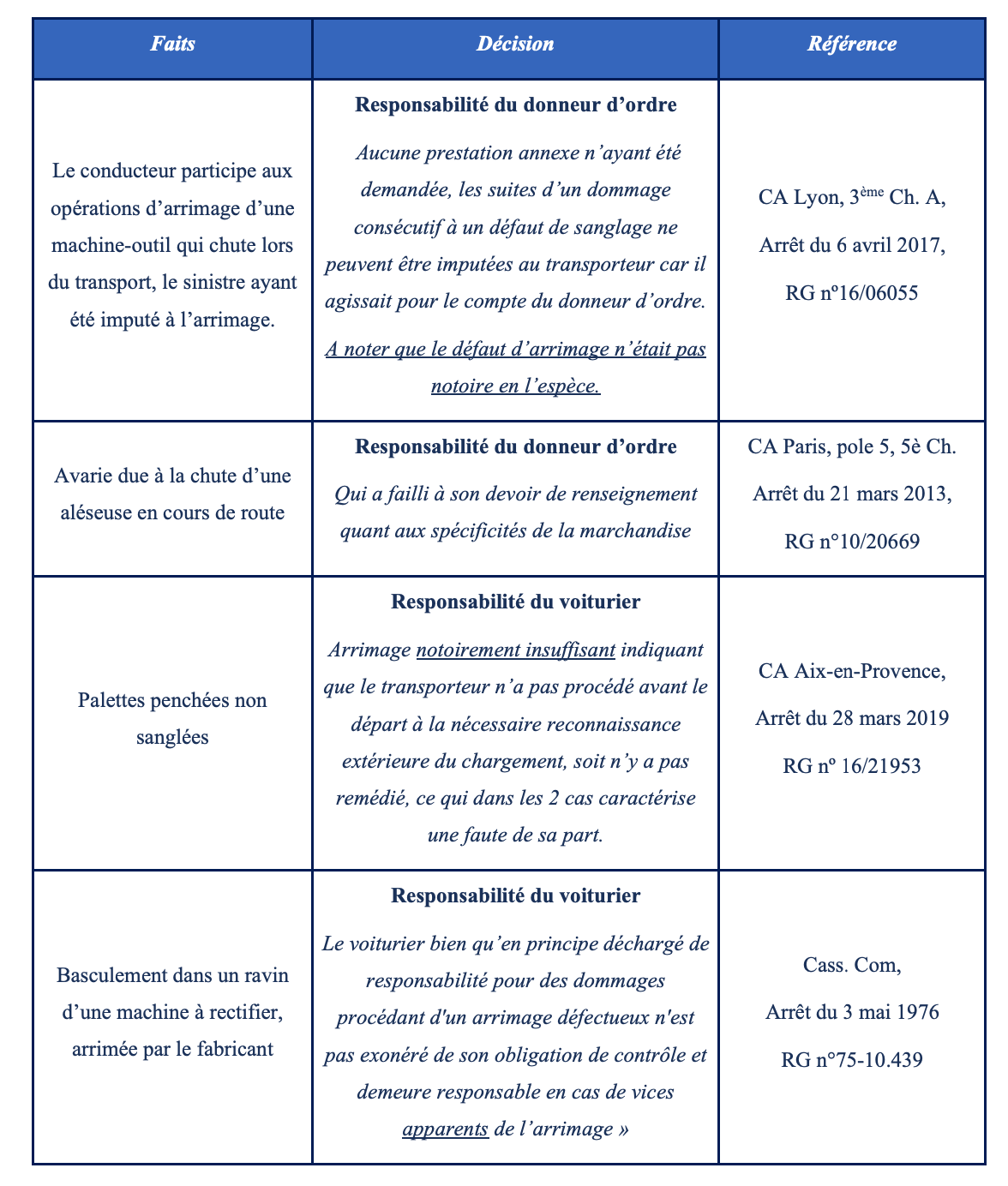 In these different cases, we notice a common denominator with the apparent or apparent non-quality of the securing defect.
This notion is repeated 3 times in article 7.1.2.

The Geneva Convention, known as CMR, does not indicate whether the carrier or the shipper is responsible for stowage operations.

Therefore, in the event of damage caused by a stowage defect, it is necessary to determine which national law should apply. In this regard, Article 5 of the Rome 1 Regulation states: “the law of the country in which the carrier has his habitual residence, provided that the place of loading or the place of delivery or the habitual residence of the consignor is also in that country“.

A brief overview of the state of the law in our neighboring countries:

The CMR therefore adds complexity to this notion of liability because it will be necessary to determine the applicable law which, as the above table shows, is not uniform in Europe.