Circumstances and causes of the fire:

Following this discovery, requests were made to the ports of Hazira (India) and Hamad (Qatar) to offload the said container.

These requests were refused due to the lack of technical resources and expertise immediately available.

The vessel therefore headed for its next port of call located in Colombo (Sri Lanka) where it arrived at anchor during the night of May 19, 2021.

On the videos of the Sri Lankan army, the ignition point is clearly identified in « bay » n°5/6 slightly on starboard. 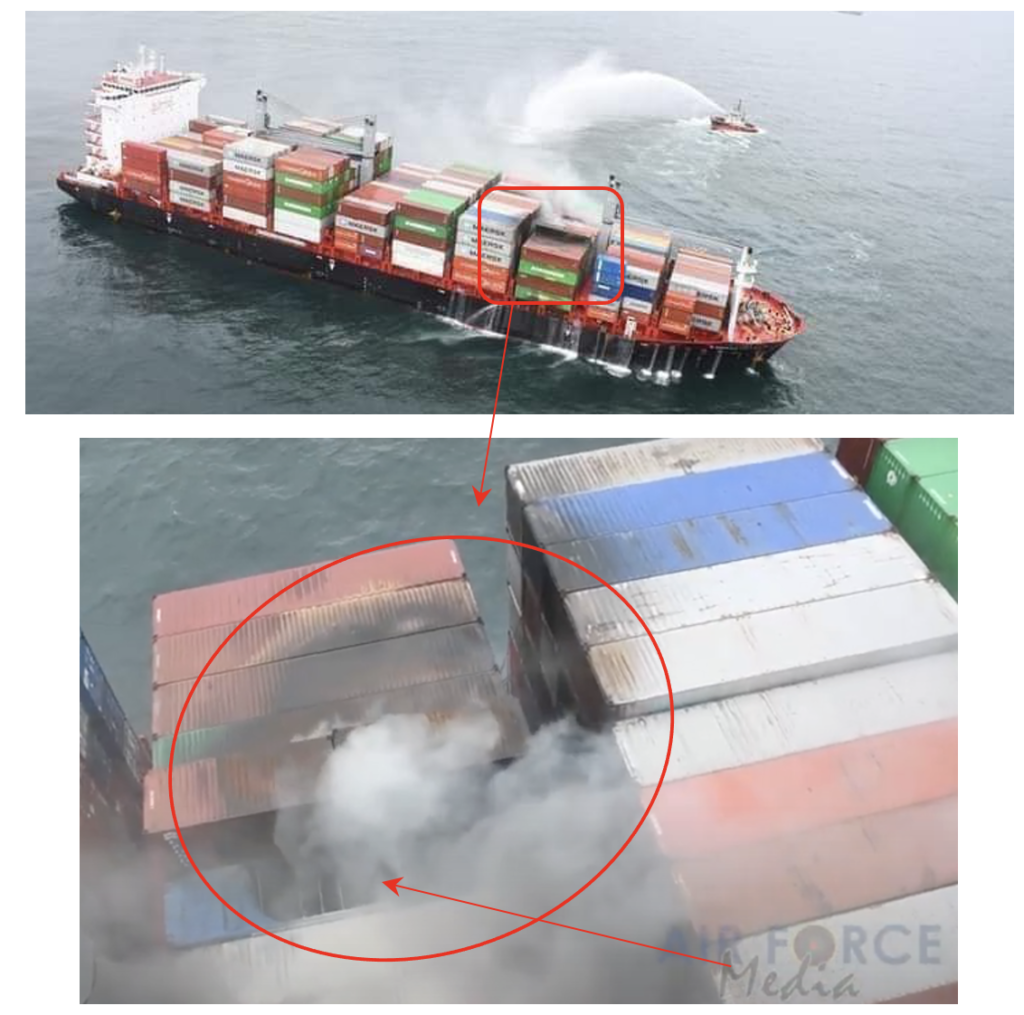 The top of the cone is circled in red with soot deposit on the container walls. The most degraded container is identified in the central part with its roof wall completely burned. A relatively thick white smoke is emitted from the epicenter.

The fire intensified and spread towards the back of the vessel due to sustained winds (20 to 35 km/h) in a north-easterly direction.

This fire was also enhanced by the presence of nitric acid.

Although nitric acid is a non-flammable compound, the mixing of this highly oxidizing substance (category 2 oxidizer) with combustible products can cause a fire by exothermic reaction and then promote its propagation.

The reactions of nitric acid with many organic compounds or certain mixtures are violent and can lead to explosions.

For this reason, the Safety Data Sheet (SDS) of the product indicates in the storage section :

« Keep away from combustible substances, reducing agents, bases, organic chemicals and food and feed products. Store in a cool place. Dry. Store in a well-ventilated area. Keep in original container. »

As far as the original leakage is concerned, it is possible that a packaging defect is to be considered. The packaging rules are defined by the IMDG (International Maritime Dangerous Goods Code).

In conclusion, the only leakage of nitric acid could not explain the fire.

On the other hand, the cause of this nitric acid leak will have to be identified (respect or not of the IMDG code) as well as the understanding of the chemical reaction which led to the start of the fire and then to the explosion.

In addition, the fire fighting methods will be studied to determine if they were appropriate to the situation and the information available.

Lastly, the refusal to accept the passengers at the ports of Hazira and Hamad will probably be examined to the extent that appropriate care could have made it possible to limit or even avoid this disaster, if it was not already too late.

The Voyage Data Recorder (black box) of the vessel has been recovered by local authorities and will provide important elements to understand this major incident.

The head of the Marine Environment Protection Authority, Dharshani Lahandapura, said it was the « worst accident ever in his lifetime».

The Marine Environment Protection Authority (MEPA) of Sri Lanka has asked the National Building Research Organization to conduct an impact study on the air pollution caused by the X-Press Pearl fire.

Representatives from the International Tankers Owners Pollution Federation (ITOPF) and Oil Spill Response (OSR) were deployed to monitor any oil spill and assist with beach clean-up.

Although a gray sheen emanating from the wreck was observed, no oil spill was detected.

If the oil spill remains a latent threat to marine biodiversity, its visibility makes it a “less” formidable pollution.

On the contrary, the chemicals evaporated into the atmosphere and spread into the depths of the sea.

Thus between 8,000 and 13,000 metric tons of atmospheric pollutants were released into the atmosphere depending on the amount of mass burned from the incident.

The first brutal images of dead turtles, whales and dolphins were relayed by numerous press articles and testimonies on social networks.

As for the 78 tons of plastic pellets, they are well visible on the 300 kilometers of coastline in Sri Lanka.

This pollution has led to the suspension of fishing activities (9900 fishermen affected), which are vital for the population.

Sri Lanka announced on June 12 that a compensation of $40 million had been requested from the shipowner X-Press Feeders for the massive pollution caused.

As far as the material damage is concerned, the vessel and its cargo are to be considered as a total loss.

The costs of response, surveillance and evacuation of the vessel (scheduled for September) will also be significant.

The Swedish Club (P&I) has confirmed that it is the primary Hull Insurer for the X-Press Pearl.